What to expect from your employer

What Is Unionbusting?
The term union busting describes the planned course of action to stop workers from organizing a union or to destroy a union already in the workplace. Because federal labor law is woefully outdated and ineffective in protecting and enforcing workers’ rights to form unions, it has become standard practice for employers to block workers’ from freely banding together to have a voice on the job, often through the use of unionbusters.

Why Do Employers Unionbust?
Employers who have a hostile, kneejerk reaction to the possibility of union organizing often deploy aggressive union-avoidance strategies, like hiring union busters. Employers often use unionbusters because they fear employees having a meaningful say on hours, pay, benefits and working conditions – a fear sold to them by the unionbusting industry at extravagant seminars and conferences. Our broken U.S. labor law, affording no real deterrent for unlawful conduct, creates an added incentive for employers to engage in aggressive unionbusting. Yet there can be high hidden costs to unionbusting for employers. The intimidating, prying nature of unionbusting campaigns can divide a workplace and may lead to low morale, less productivity and increased turnover. Such unanticipated consequences may negatively impact consumers and stakeholders. Unionbusting also may mean maintaining poor job standards that can drag down working conditions across industries and regions.

Who Are Unionbusters?
Union busters are professional consultants or lawyers who may represent a legal consortium or consulting firm and specialize in advising employers on how to thwart union organizing drives or how to decertify unions without (technically) breaking the law. These individuals or firms advertise their ability to manipulate our broken labor law system. Union busters usually self-identify as “union avoidance firms,” “management consultants” or “labor consultants.”

Union busters offer legal services, advice and consultation, training seminars, workshops and materials for management and supervisors, and a variety of targeted anti-union propaganda for distribution to employees, including videos, posters, leaflets, flyers and giveaways. Unionbusters’ sophisticated advice, training and materials  help an anti-union employer create a sense of dissension and division among employees during an organizing campaign and spread misinformation about the union before workers vote in a union representation election.  Additionally, these “consultants advise management on how to stall or prolong the bargaining process, almost indefinitely – bargaining to the point of boredom….

Why Haven’t I Heard of These Firms?
Unionbusters operate under the radar intentionally. Unionbusters often provide material and instructions behind the scenes to anti-union employers who then direct middle-management and supervisory staff to carry out and distribute the unionbuster’s advice and materials. In this way, the unionbuster does not deal directly with employees and, as a result, may avoid having to disclose financial reports about such activity to the U.S. Department of Labor. The unionbuster’s name or firm is rarely used or referenced in the anti-union materials distributed to employees, further masking the unionbuster’s involvement in orchestrating the anti-organizing campaign. Currently federal law requires little in the way of transparency or reporting, so anti-union employers and consultants have no incentive to divulge specific details about their work or the costs of this practice.

How Successful Are Unionbusters?
It is no coincidence that as the unionbusting industry has grown the rate of union membership has declined.  A unionbuster profiled in Fortune magazine boasted of preventing 32 of 35 of his clients’ organizing drives in one year.  Unionbusters even go so far as advertising their rates of success. One firm, Labor Relations Institute, now boasts a money-back guarantee on its website: “If your organization purchases an LRI Guaranteed Winner Package and the union becomes certified, the Labor Relations Institute will refund the full cost of the package.

What Are Common Unionbuster Tactics?
Supervisors as Frontline Soldiers: Supervisors, who themselves have no legally protected right to be represented by a union, are often tasked with doing the dirty work of the unionbusters and management. Middle managers and supervisors who have closer relationships with rank-and-file staff are often directed to deliver anti-union letters, speeches and informal talks prepared by unionbusters.

One-on-One Meetings:During union organizing drives, 77 percent of workers are forced to attend intimidating, closed-door or isolated meetings with supervisors.5 These aren’t friendly impromptu chats, but well-planned meetings designed by unionbusters to decipher employees’ feelings about the union and persuade them against the union.

Captive Audience Meetings:So-called “captive audience” meetings are held for employees during work hours to disseminate propaganda against union representation and to attempt to discredit the union. Eighty-nine percent of employers hold captive audience meetings during an organizing drive.6 Employees are almost always required to attend, but union organizers may be intentionally dis-invited. Often, the meetings are rigged so that workers who are already against the union are assigned to ask questions to sow misinformation.

Delay:Unionbusters often attempt to delay union representation elections by legal maneuvers so they have more time to implement other tactics needed to increase tension, dissension and the employer’s chance of winning the election.

Divide and Conquer:Unionbusters manipulate staff dynamics to make employees feel that there is a tense division among staff concerning the union election. They may go so far as to pit one group of employees against each other, based on race or ethnicity.

Love Offerings:In order to convince employees that they don’t need a union, unionbusters may advise clients to provide indirect bribes, like unexpected increases in wages or benefits or “feel good” measures like free food and lottery tickets. 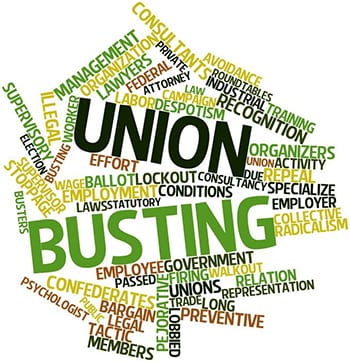 It is truly amazing at what lengths companies will go to tell you how to spend your hard earned money. What if companies told you where to buy your car, what kind of car to buy, what kind of cell phone to purchase, what computer to buy, where to get your groceries, what food to buy, where to go on trips for vacations, where to buy your gas, what to eat for lunch, what house to buy, where to get your car serviced, etc.? So why do companies use every tool in their arsenal to tell you not to purchase the rights for dignity and respect on the job? If they don’t want you to purchase this service, why don’t they tell you not to purchase other services you use everyday? Because they know that if you have a union, you are no longer under the thumb and control of the company. On the contrary, they know by forming a union, you have the control over your own life making your own choices that are fair and equitable for you and your family. If they don’t tell you how to spend your money outside of work, tell them not to tell you how to spend your money at work.

Typical Company Anti-Union Tools  – Companies have access to a wide variety of anti-union material from many sources. The typical anti-union campaign has a timeline of activities where you can expect confusion, coercion and intimidation to keep you from becoming a union. Lies are usually out front. Companies will tell flat-out lies and put out misinformation and statements about the IAM every step of the way to try and convince you that forming a union is a bad deal for you. Or have you heard this one? “We’ll have to close down and move elsewhere if the union gets in here” or “We will no longer afford to be in business”. The list goes on with what companies tell their employees. All this rhetoric, while they rake in millions of dollars in profits. Companies go to extraordinary lengths to make sure you stay “union free”. When was the last time your employer cared so much about your well-being except when you decided to look into forming a union? In some campaigns, companies will go to the edge or break the law just to prevent you from forming a union.Know your rights and keep good notes and copies of company propaganda and threats. Good documentation is very helpful should the IAM need to file Unfair Labor Practices (ULP) against the employer for unlawful activity. The IAM will not respond to all anti-union rhetoric. The IAM believes in staying positive and on-task while assisting you in forming your union.

Typical Company Tactics, Weeks 1-3
Week 1 – Get Supervisors involved –  Companies will usually start introducing the company’s position on unions. Keeping companies “union free” is big business in America. Books, videos, seminars and consultants all aid employers in their attempts to convince you that staying “union free” is in your best interest. “Union Busters” The “Union Avoidance” industry, a term heavily used by employers, employs more than 10,000 lawyers and consultants. They are usually called in the moment a company hears that employees are interested in unionizing.

Week 1 – Job Security  – For the first week of the campaign, management has prepared its front line troops, the supervisors. Preparation is over and the ground work is laid. Management is ready to begin its all-out assault. By this time you have probably received at least one handbill/love letter from the company. Focus on the second week shifts to the first of several issues that you will be hammered with over the coming weeks. Job security is usually one of the first issues given, playing on the potential fear created through the idea of economic insecurity.

Week 2 – Collective Bargaining – The general goal this week is to convince you that you will receive less under a union contract than you already have. You may begin to hear things like “you start from zero when negotiating a contract and you may end up with less than you have already”. Or they may say you’ll start from a “clean sheet of paper”. Department of labor statistics show that unionized workers have better wages, benefits and working conditions than non-union workers.
Typical Company Tactics, Weeks 4-6

Week 2 – Direct Assault on the IAM – What is more intimidating than direct assaults to your personal security? During the campaign management will try to create an atmosphere under which you and your co-workers become fearful of the union. Attempts will be made to make you believe that vandalism and intimidation are what the union is about. These attempts are usually carried out using two themes: Vandalism of personal property and threats and intimidation of your co-workers.

Week 3 – Strikes  – One of the most effective tools in a union buster’s arsenal is strikes. The reason they advise managers and supervisors to hammer this issue as often as possible is because not only does it conjure up images of personal security but economic security as well. Let’s unravel the myth of strikes. Although the company would love for you to believe that you “can be called out on strike” the Machinists Union requires that 2/3 majority “vote” to strike. During the past 10 years, IAM negotiators won fair agreement without loss of a minutes work in over 99% of our contracts. In fact, more people in the U.S. miss work due to the common cold than because of strikes!

Week 3 – The “Final Push” and the “Sympathy Plea”  –  Now it is the last week of the campaign. This is the employer’s last chance to convince you that a union would not be in your best interest. Time is running out and for the employer, and desperate times require desperate measures. During the week your employer will review each of the topics already discussed. Letters home or meetings will occur almost every day of the week of the election.

Back to the Process